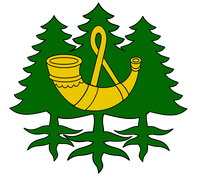 GUILDS ARE NOT OFFICIAL IN THE SCA. WE MAY IMPLEMENT SOME OF THE SCA RULES HERE BUT WE ARE NOT SPEAKING ON BEHALF OF THE SCA. WE ARE AN INDEPENDENT GROUP THAT PLAYS BOTH WITHIN AND OUTSIDE OF THE SOCIETY.

High Warden, Finne Breth
Finne Breth is currently serving as Warden of the Forests of Atlantia. She lives in North Central Virginia and is also Keeper of the Forest of Stierbach. Covid notwithstanding, she leads a monthly medieval hiking and outdoor skills group, the Stierbach Saunterers, and has been an intermittent member of the SCA since 2006 (only active since 2018). She lives with her family and various animals at Entheim-in-the-woods and is a bicycle and pedestrian planner in the outside world. In the Society Finnebreth is a minor noblewoman stewarding a forest holding in 14th century England, although she also “does” other periods, particularly Viking. She loves teaching, camping events, crafting stuff, and bringing people together.

High Sheriff, Coenred æt Rauenesdale
Coenred æt Rauenesdale portrays a 9th century Northumbrian from a small village west of York. He manages the lands of a Danish lord in order to keep his own lands. Within the SCA, he resides in the Canton of Brockore Abbey, in the Barony of Nottinghill Coill. He is a founding member of the guild, a former High Warden and Warden of the South.

High Chronicler, Isobel of Carnewyth
​Isobel of Carnewyth is the current High Chronicler for the Guild and achieved the rank of Forester in the Fall of 2019. She has been an active member of the Barony of Stierbach for the last five years and has interests in diverse arts, apothecary, and archery. Fire cooking, foraging, and field testing medieval gear on hikes are among her favorite Guild activities. Her favorite events involve camping and classes and during quarantine, she continued teaching at the University of Atlantia, introducing a new joint course on foraging with Finne Breth. She also created a demo video on dyeing with purple dead nettles in addition to gardening, sitting at many backyard fire pits, and enjoying the occasional socially distant camping trip.

Warden of the North, Margot Morgan
Margot Morgan is the current Warden of the North. He portrays a Royal Forester in the woods of lower Wales and upper Scotland 1250 to 1350 where he held many tiles from Master of the Hunt to tree tax collector for harvest wood and sapping. He has been a Royal Forester with the guild for almost 4 years where he shares about forest care and teaches camp fire cooking and fire safety.

Keeper of the Forest of Caer Mear, Elias de Birton
Elias de Birton is currently acting as the Preceptor for the Guild and the Keeper of the Forest of Caer Mear.  As  the pandemic has put most in-person activities on hold, he has been focused on helping the guild develop a more robust web presence. He portrays a mid-14th century English forester in the Royal Forest of Wirral. Elias began working on his forester portrayal in 2013 and attempted his first primitive overnighter with medieval-inspired gear in 2014. While it wasn’t exactly successful, it was very informative, and he has been hiking and camping in funny clothes (and trying to convince others to join him) ever since! He joined the guild and achieved the rank of Forester in early 2018. His favorite guild-related activity is flint and steel firemaking, which he enjoys practicing, researching, and especially teaching! He has taught classes on period firemaking and medieval-inspired gear for backcountry camping at the University of Atlantia, and always encourages other guild members to take advantage of the opportunity to share their skills and knowledge with the Kingdom.
The Atlantia Forestry Guild is devoted to research, recreation and education of forestry and outdoors skills regarding no trace camping, protecting the green spaces, self-reliance, wood craft, camp craft, bush craft, overland travel, inland water travel, outdoor cooking, survival, and other outdoor and primitive skills all in period fashion. It is the purpose of guild to research, recreate, educate and demonstrate historical tools, methods, equipment and techniques for living, camping, traveling and cooking, in the outdoors or in wilderness locations.